The patient is a 28 year old female who was admitted to the emergency department of a different ophthalmology clinic on January 2013 with complaints of burning sensation, photophobia and weeping on both eyes.
She had self-medicated herself with a Chloramphenicol ointment but noted no improvement.

After observation she was diagnosed with an infectious keratitis and, due to the presence of a distincitive ring infiltrate on the left eye, an Acanthamoeba infection was suspected.
A PCR assay was requested that later confirmed Acanthamoeba as the ethiology of the keratitis.

There was satisfactory clinical response to the therapy intiated but a fibrotic remodelling of the corneal stroma ocurred, precluding an effective visual improvement

On March 2014, fifteen months after the beginning of the condition, the patient was brought to the emergency department of our clinic with a descemetocele and corneal perforation of the left eye.

Past Medical History and Review of Systems (If relevant):

The patient's best corrected visual acuity was counting fingers in the right eye and hand motion perceptio of the left eye.

Slit lamp examination of the right eye showed a central corneal scar. The left eye had a descemetoele and corneal perforation. 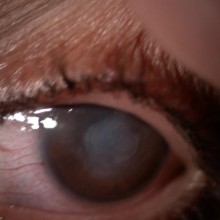 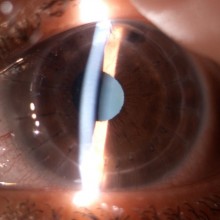 The patient was discharged and then followed on an outpatient basis.
Treatment with topical Chlorhexidine and Propamidine was maintained, along with the standard treatment for penetrating keratoplasty.

Three weeks into the post-operative period, the patient complained of sudden decrease of visual acuity and severe photophobia.

A relapse of the Acanthamoeba keratitis was diagnosed.
A new penetrating keratoplasty was planned and performed 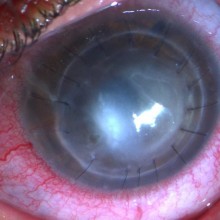